Home » Sense, Perception and Utility: German Experimental Psychology and the Emergence of Marginalism

Sense, Perception and Utility: German Experimental Psychology and the Emergence of Marginalism

The paper attempts to explore the potential role of German Experimental Psychology on the transition period from Classical Political Economy to Neoclassical Economics, i.e., on the so called Marginalist Revolution. In the 19th century in Germany the experimental approach in the study of mind was a commonly used methodology and led to the foundation of numerous schools in contrast with the British, French and American traditions. These phenomena can be partly explained by special characteristics of the philosophical tradition and the education system of Germany.  These schools heavily influenced the trends in social sciences including psychology and economics, especially the development of marginal utility theories. The paper sketches a pattern of the documented and potential links among philosophers, natural and social scientists involving authors from certain ‘schools’ of psychological thinking and neoclassical economics. In particular, it focuses on the inspirations of Hermann Heinrich Gossen and provides new insights on the potential influence of the philosopher-psychologist Friedrich Johann Herbart on Gossen. 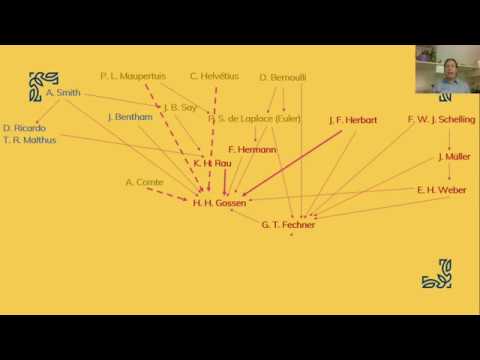 2 Responses to "Sense, Perception and Utility: German Experimental Psychology and the Emergence of Marginalism"