This paper argues that economic phenomena can be examined from five analytical levels: a statistical descriptive approach, a causal explanatory approach, a teleological explicative approach, a normative approach and, finally, the level of application. The above viewpoints are undertaken by different but related economic sciences, including statistics and economic history, positive economics, normative economics, and the ‘art of political economy’. The paper maintains this thesis picking up elements from John Stuart Mill, John Neville Keynes, and Carl Menger’s works.

Typically, positive economics has analyzed economic phenomena using the second approach. It has not been concerned with ends, taking them as given. However, various new economic currents have emerged during the last 40 years, and some of these do assign a fundamental role to ends within economics. The paper will argue that the field of positive economics should adapt to deal with the issues that arise from this: it should include the third level of analysis. 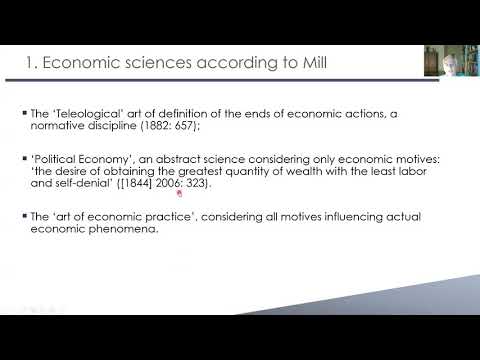 One Response to "A multilevel approach to economic phenomena: economic sciences according to J. S. Mill, J. N. Keynes, and Carl Menger"